This is an excerpt from a review we have found of an exhibition that took place in 2070 to commemorate the 50th anniversary of the outbreak of Coronavirus strain Covid-19. (Read the longer version here)

50 years ago in 2020 the world was hit by a viral pandemic. It began in January in the Chinese city of Wuhan and left thousands dead worldwide within weeks. This exhibition at the Museum of National Consciousness, commemorates the fact that this outbreak was the springboard into long-overdue research and understanding of viral strains. This was one of the main drivers leading to the development of pan-viral immuno implants.

Being housed in the home of culture, the exposition tells of the British psyche. Many jokes were circulated to lighten the mood. This cartoon provides a window into one of the immediate problems created, that of so-called “panic buying”. 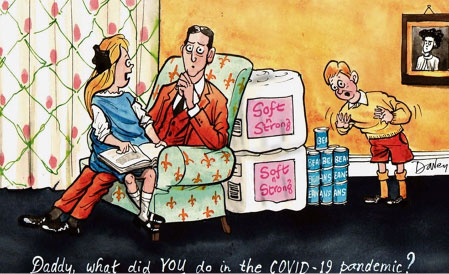 The media and particularly the social media were largely blamed for this – via these platforms, the “fake-news” doom-mongers were to be found culpable of fanning the flames of disquiet. 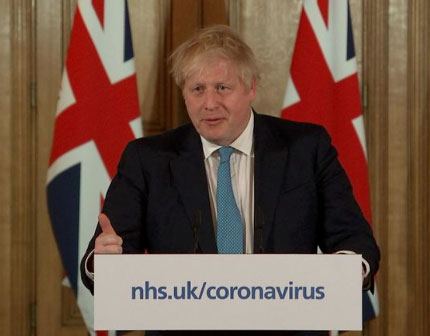 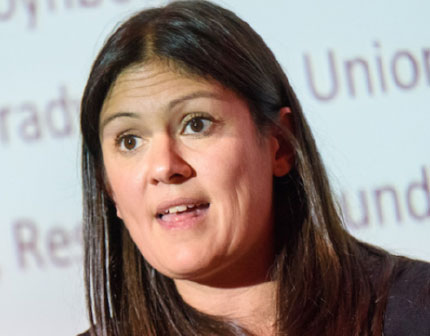 But it also provides serious messages. It tells of the surprise defeat of Prime Minister Boris Johnson in the 2024 general election to the Labour Party’s new leader, Lisa Collis (neé Nandy), invoking memories of Churchill’s loss to Clement Atlee immediately after the end of World War 2.

This of course was a world before MundoGov and the collapse of the European Union; the EU crumbling after its total lack of action during the crisis – not helped by the subsequent success of “Brexit” in the UK – yes we were still the United Kingdom then.

Above all this exposition is a reminder of the way in which our social conscious underwent enforced change. Gone were the debates about gender equality and in came discussion about thinking of others first and oneself second; some may remember the “Helpful Harry” campaign by the United Political Parties once Collis’s government had fallen under the ChangShi directive of 2029.

For the UK, as was, it sounded the death nell for the NHS in its existing form. Long in need of complete overhaul but so politically charged it could not happen, Covid-19 finally gave an opportunity to streamline the service, taking some treatment wholly into the private sector, joining social care into the now smaller NHS, and allowing more treatment to greater numbers with increased efficiency.

To say any of that in 2020 would of course have led to political suicide – perhaps the hints he made towards this were in fact Boris Johnson’s own prime-ministerial death sentence?

Visiting the exposition may help you decide.

This text has been translated back to early 21st century English from Anglo-Mandarin N-Crypt to further remind us of the original language idioms in use at that time. For more information contact info@motivation81.co.uk